On 17 December 1948 there was report in the "Barrier Miner" newspaper, in Broken Hill, NSW
Shearer To Pay £4/16/
Alexander Claire North, shearer, was fined £1, with 8/- costs, by Mr. A N. Bott, S.M., in the Police Court today, for having driven an unregistered motor vehicle on June 24.
On another charge, of having driven an uninsured motor vehicle North was fined £3, with 8/- costs.
The charges arose from an accident on Wilcannia road on June 24. The defendant pleaded guilty to both charges.
Mr. M. Austen Brown appeared for North and Sgt. G. Dennett prosecuted for the police.3
He was a shearer and a shearing contractor.

He died on Monday, 14 April 1952, while travelling on the road from Broken Hill to Wilcannia, New South Wales, Australia

MAN KILLED IN LORRY
SMASH ON DISTRICT ROAD
One man was killed and four other persons escaped when a lorry overturned on the Wilcannia Road, about 48 miles from Wilcannia yesterday.
The dead man was Alexander Clair North (39), of Henley Street, Torrensville, S.A. It is believed that he was killed instantly.
Driver of the truck (Sidney Keith Reid, of Kalangadoo, SA) Ida Clark, William James and Bruce Roberts (all of Broken Hill) escaped injury. They were treated at the Hospital for shock and abrasions.
Mr. North, who owned the truck was travelling on the back when it veered off the side of the road and overturned finishing on the wheels in an upright position.
Mr. North's death was the fourth in the past fortnight as a result of accidents.
The Coroner (Mr. W. H. Hall) is expected to set a date for an inquest.
S.A. BURIAL
The remains of Mr. North will be sent to Adelaide tomorrow for burial on Thursday.
Mr. North was 39-years of age, and a shearing contractor. He was the son of Mr. and Mrs A. C. North, of 28A Henley Street, Torrensville. He leaves two brothers in Broken Hill (Messrs. M. C. and G. North). Funeral arrangements are to be conducted by Baker and Woodman of Broken Hill and F. J. Siebert of Adelaide.3
Alexander was buried on 17 April 1952 in the Centennial Park Cemetery, Pasadena, South Australia

On 3 December 1954a Probate notice was placed in the "Barrier Miner" newspaper by Sydney based solicitors:-
PROBATE NOTICES

IN THE SUPREME COURT OF NEW SOUTH WALES PROBATE JURISDICTION IN THE ESTATE of ALEXANDER CLAIR NORTH late of 28A Henley Street Torrensville, in the State of South Australia, Shearing Contractor, deceased intestate. Application will be made after fourteen days from the publication hereof that the Letters of Administration of the Estate granted by the Supreme Court of South Australia to ALEXANDER CLAIR NORTH may be sealed with the seal of this Court, and all notices may be served at the undermentioned address.
All creditors in the Estate of the said deceased are hereby required to send in particulars of their claims to the undersigned.
E. R. HUDSON, Proctor for the Administrator, The Exchange, Argent Street, BROKEN HILL.
By his Agents: NICHOLL and HICKS, Solicitors, Watson House, 9-13 Bligh Street, SYDNEY.3 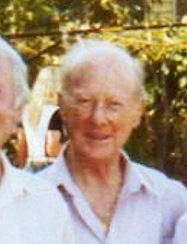 Francis Anthony Purcell was born about 1913.2

Francis was buried on 17 August 2004 in the Centennial Park Cemetery, Pasadena, South Australia