In January 1831 Peter Withers was sentenced to death for his part in the "Swing Riots" that had been occurring throughout rural areas of southern England. The riots were the culmination of several years of declining prosperity and standards for the farm workers. With oppressive landlords and the introduction of machinery, they could see a future of worsening unemployment and starvation for them and their families.

The 19th century politician William Cobbett, who had grown up in rural England and taught himself to read and write, said in 1826:

"This is the worst used labouring people upon the face of the earth. Dogs, hogs and horses are treated with more civility ... there must be an end to it ... and that end will be dreadful."

Spontaneous riots broke out across the countryside, with threshing machines being smashed and haystacks burned. Threatening letters were sent to the worst of the oppressive landlords, signed "Captain Swing", hence the name "Swing Riots".

Peter Withers had taken part in one of the riots, near the little village of Rockley in Wiltshire where several people, including a special constable, were injured and the landlord forced to give the mob two sovereigns. When the verdict was handed down a local newspaper reporting the trial, stated that the prisoners and the families cried and wept; even the judges cried, as they had no option because the sentence for armed robbery was a mandatory death sentence. The execution was to take place on Tuesday 25th January 1831. There was a petition launched for a more lenient sentence and this brought a reprieve; the sentence was commuted to "transportation for life". However the prisoners, Peter Withers and James Lush, weren't told of the reprieve until 24th January, the day before the date of execution. 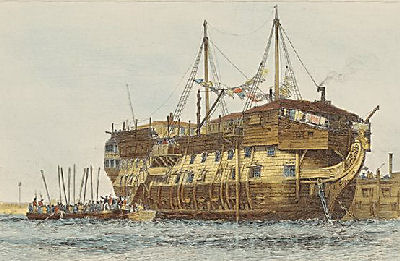 From the place of the trial, Salisbury, Wiltshire, the prisoners were taken to the rotting prison hulk "York" in Portsmouth harbour awaiting transportation to Van Diemen's Land (Tasmania). On 18 March 1831 they left on board the "Proteus", arriving in Hobart after a voyage of 138 days, on 3rd August 1831.

Peter Withers and his wife, Mary Ann nee Hobbs, had only been married for a couple of years and had three children, two girls and a boy. Peter was the only one in the family who could read or write; beside the clergyman, he was the only one to sign their marriage certificate. Mary Ann and the two witnesses signed with an X. We are fortunate that some of Peter's letters have survived and while waiting in Portsmouth he wrote to his wife:

"My Dear wife belive me my Hart is almost broken to think I must lave you behind. O my dear what shall I do I am all Most destracted at the thoughts of parting from you whom I do love so dear. Believe me My Dear it Cuts me even to the hart and my dear Wife there is a ship Come into Portsmouth harber to take us to the New Southweals.

"It is about 4 months sail to that country...we shall stop at several cuntreys before we gets there for fresh water I expects you will eare from me in the course of 9 months...You may depend upon My keeping Myselfe from all other Woman for i shall Never Let No other run into my mind for us tis onely you My Dear that can Ease me of my Desire. It is not Laving Auld england that grives me it a laving my dear and loving Wife and Children, May god be Mersyful to me." 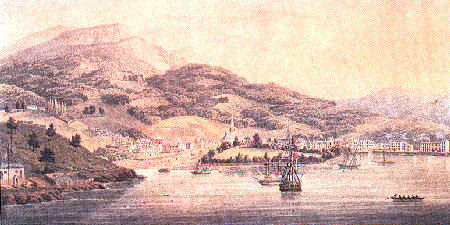 On the voyage to Hobart he again wrote:

"My Dear Wife...We [h]ears we shall get our freedom in that Country, but if I gets my freedom even so I am shure I shall Never be happy except I can have the Pleshur of ending my days with you and my dear children, for I don't think a man ever loved  a woman so well as I love you.

"My Dear I hope you will go to the Gentlemen for they to pay your Passage over to me when I send for you. How happy I shall be to eare that you are a-coming after me....Do you think I shall sent for you except I can get a Cumfortable place for you, do you think that I wants to get you in Troble, do you think as I want to punish my dear Children? No my dear but if I can get a comfortable place should you not like to follow your Dear Husband who Loves you so dear?"

Mary Ann didn't reply to Peter's letters because she couldn't write and couldn't afford to pay someone to write for her. With a 9-10 month gap between letters (the time to get to Australia and back) a lot could happen in the intervening time, and it was 11 years before Mary made contact with Peter. Peter was still hoping his wife would join him and wrote to his brother that he had "a good Master and Mistress...Plenty to eate and drink as good as ever a gentlemen in the country..." and added: "...so all the Punishment I have in the Country is the thoughts of leaving My friends, My wife and My Dear Dear Children, but I lives in hopes of seeing Old England again."

With no news from Mary Ann, Peter decided to marry again so he would, as he told his brother; "a partner which would be a comfort to me in my Bondage."

When Mary Ann finally wrote to her husband seeking a reconciliation, some 11 years after their separation, she was too late. But even though Peter had taken another wife, he wrote kindly and with honesty to Mary Ann:

"I have no property of my own but my wife have property which she will have in the course of two years and then we have agree to help you an the children if God spares our lives. I know that for to eare that I am married is a hard trial for you to bear, but it is no good to tell you a Lye."

Mary Ann never remarried and lived out her life in and around Paddington, Middlesex, where some of her children and grandchildren were living. She died in Paddington, aged 87, in the December quarter of 1885.